On a typical weekend away, club members leave London on a Friday evening, returning on Sunday evening in time to get home by public transport. The meet report below gives an impression of what takes place on a meet with more of an emphasis on walking. 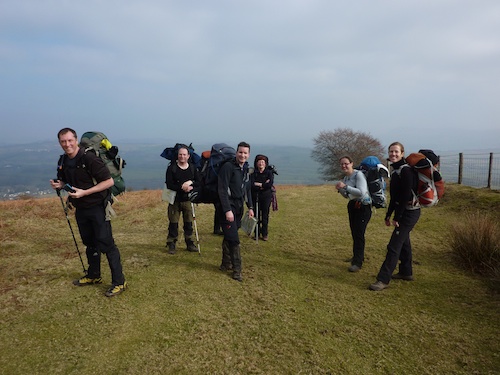 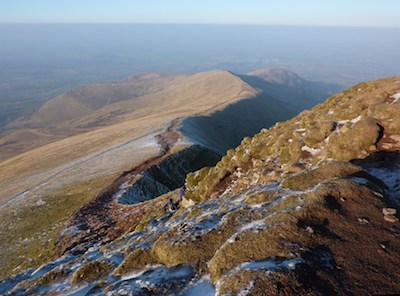 The Brecon Beacons national park is a wild and unforgiving place in Winter and is the area used to test the toughest of soldiers to join the elite SAS Regiment. This was the perfect location for the LMC’s Winter backpacking meet, where we would do the LMC version of the infamous SAS "fan dance".

After some last minute drop outs, ten of us meet at the lovely Royal Oak pub in Pencelli on Friday night.  Over a couple of pints of Cribyn ale (brewed very locally), the proposed route was discussed.

Saturday morning was bright and cold: a perfect start to the weekend’s adventure.  After the meet steward had cooked a couple of rounds of bacon butties for the team, which has now become a bit of a tradition, we set off on our "fan dance", passing the 13th century church of Pantllefrith as we started to ascend towards the Bryn. The weather although warm in the sun was cold and sharp in the wind or shade. With good visibility, the route was clearly laid out ahead of us in a ascending right hand arc.

After a couple of hours of continuous ascent, Julia and Louise went ahead and found an ideal lunch spot. Like mountain sheep we tucked ourselves away off the path in a little sun-trap to relax, eat and take in the views. After lunch the main peaks awaited. First was Fan y Big with its famous diving platform. After the obligatory photos we descended down into the col of Bwlch ar y Fan and then started the long step ascent to Cribyn (795m).  As we got higher the snow and ice become more pronounced. At the top the final two peaks were in reach, Pen y Fan (886m) and Corn Du (873m) after a long and hard day carrying heavy packs we had reached our final summit of Corn Du. As time was ticking on and the sun was beginning to sink and with it the temperature, the route was reorganised to find a closer wild camp spot. We descended from the col Bwlch Duwynt and pitched our tents on a small piece of flat ground next to the lively stream of Blaen Tal Fechan.

Once tents were up, the stoves hissed into life allowing us to prepare a cuppa and cook supper. In winter hot food and drink is a must as the temperature dropped to -3 deg C. After dinner, Louise cracked open her platypus of red wine whilst Stephen magicked up two bottles of wine. After helping finish off the wine, the team found sleep relatively easy.

Sunday was cold. Tents were frozen and there was low mist. After a quick breakfast and a chat about possible routes, a decision was made to take a slightly more interesting route back to our start point going over Craig y Fan Ddu.

Walking down to the reservoir, Upper Neuadd, the wind started to increase. The first serious ascent of the day was shared with a mountain marathon event. As we laboured up the steep slope with our heavy rucksack, nimble mountain runners glided past us up onto the summit ridge.

Although the weather meant that the views were curtailed, the path and the immediate scenery gave us a sense of height and isolation. In the mist and wind, good navigation was needed to ensure that we did not get lost and that we ended up where we had planned.

After a lengthy decent through upland deciduous forest we eventually arrived back at the campsite where we had left our cars. A great fan dance was had by all.